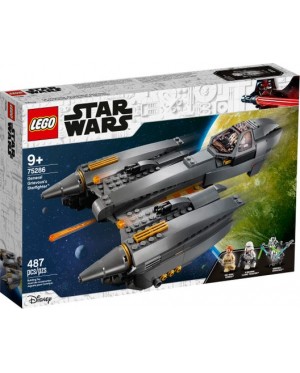 • There are lots of ways to play with this 487-piece set, making it a great birthday present or holiday gift for boys and girls aged 9+ to introduce them to LEGO® Star Wars™ building toys or expand their collection.

• No batteries required! This popular LEGO® Star Wars™ spacecraft building toy is powered by kids’ imaginations, so they can use the starfighter and LEGO minifigures to play out the best galactic adventures.

• Thinking of buying this spacecraft building kit for a Star Wars™ fan who is new to LEGO® sets? No worries. It comes with illustrated, step-by-step instructions so they can build independently and feel Jedi-level awesome!

• There are LEGO® Star Wars™ sets to delight fans of any age, whether they want to recreate classic action from the saga, role-play their own stories or simply build and display the spectacular construction models.

• Ever since 1958, LEGO® bricks have met the highest industry standards, which ensures they are consistent and connect and pull apart easily every time – no need to use the Force!

• LEGO® bricks and pieces are tested in almost every way imaginable so you can be sure that this Star Wars: Revenge of the Sith building set meets the highest safety standards here on planet Earth – and in galaxies far, far away!