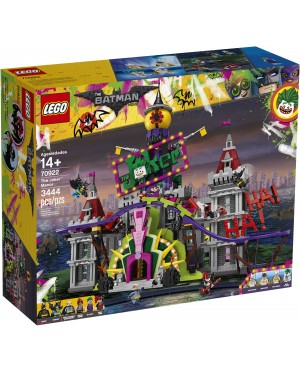 
Dare to enter The Joker™ Manor!

The Joker™ has taken over Gotham City and jokerized Wayne Manor into The Joker Manor! Break into the huge building with Batman™, Barbara Gordon, Alfred Pennyworth™ (in his classic Batsuit) and Nightwing™. Dodge the punching boxing gloves and the giant The Joker head’s trapdoor and slide. Defeat The Joker and Harley Quinn™ and win back control. Then make Batman’s favorite lobster thermidor in the microwave, watch a romantic DVD, play the guitar, have a swim or go for a ride on the rollercoaster!

Help Batman™, Barbara Gordon, Alfred Pennyworth™ (in his classic Batsuit) and Nightwing™ regain control of the jokerized Wayne Manor with this massive THE LEGO® BATMAN MOVIE set. The Joker™ Manor is packed with iconic details from the movie and cool functions, including a rollercoaster encircling the whole building, a huge buildable The Joker head with trapdoor and slide, punching boxing gloves, a rocking ‘The Joker’ sign and rotating ‘big eye’ tower. The interior includes a cinema room with a romantic DVD element, kitchen with buildable microwave plus lobster and lemon-slice decorated tile elements, living room with a buildable grand piano, fireplace and bust, swimming pool room, and a music studio with guitar element and buildable mixing desk and loudspeakers. Build this magnificent manor and then recreate your favorite scenes from the movie with 10 included minifigures.

WARNING : Choking Hazard. Small Parts. Not for Children under 3 years