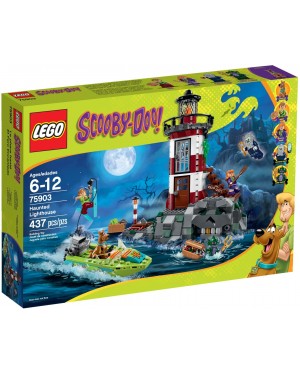 
Seek out the hidden gems at the Haunted Lighthouse!

Investigate the creepy Haunted Lighthouse with Scooby-Doo and the gang! Steer the boat with Daphne and Scooby, while Shaggy rides the water skis. Dock at the foot of the rocks, by the light pole. Move the planks with the crowbar and reveal the map with the clue to find the golden key. But beware! The Lighthouse Keeper and Swamp Monster have been hiding in the skull cave and are ready to ambush meddling kids. Battle past them, avoiding capture in the prison. When you reach the top of the lighthouse, open the secret compartment holding the golden key. Then seek out the hidden treasure chest under the lighthouse and reveal the villains’ true identities! Includes 4 minifigures with a weapon and an accessory element: Shaggy, Daphne, Lighthouse Keeper/Verona Dempsey and Swamp Monster/Mr Brown, plus Scooby-Doo (sitting version).